If you looked inside several of my kitchen drawers, you would find a wide assortment of very sharp knives. This has something to do with the fact that I am married to a Southern guy. I’m sure that if I looked into his two brothers’ kitchen drawers, I would find exactly the same thing. He also owns a few pocket knives, much treasured and kept very sharp. My son, although not as obsessive about it, also has a couple of pocket knives. I never have to struggle to open presents on Christmas morning, which is good, considering that David thinks it’s hilarious to tape them until they’re hermetically sealed.

I am not sure why we must take such exquisite care of our knives, but it is closely tied to a man’s honor and self-worth. Something to do with slaying the dragon or bringing home the big game, no doubt. Or, it could be that my husband wants to make sure that nothing keeps me from producing a fabulous meal.

Good cooking doesn’t explain the pocket knives, though. At a time when most of the nation gets the vapors from a pair of nail scissors, Southern guys are still packin’ some hardware. Years ago, we lived in Kentucky and went to a very small church where we could let the kids run around outside between Sunday school and the church service. One of the women in the church—let’s call her Prunella—was from Ohio and had no desire to fit into the local culture. Prunie had five boys of her own and had decided to parent them and everyone else in the church very strictly. Since her kids were kept away from anything that a male child might want to do, they were fascinated by the sinful ways of other boys.

One Sunday, they heard that my son had received a new pocket knife, and they were panting to see it. When Prunella saw Michael holding a pocket knife in front of her boys, she rushed over, grabbed it away from him, and gave him a furious lecture about bringing weapons to church. She then dragged him over to his father, much to her sons’ glee, and proceeded to lecture David about his worthless parenting skills. My husband had been talking to a group of a half-dozen men or so, and when they finally understood that she was ranting about a pocket knife, they all looked at one another, reached into their pockets, and pulled out an assortment of blades. Prunella nearly fainted away. What followed was a typical male conversation, comparing the beauty of the Sunday-Go-to-Meetin’ knives with the ingenious gadgetry of the Swiss Army knives. I’ve always wondered why they have a corkscrew. Is it because there’s nothing like a refreshing glass of chardonnay when you’re out in the forest chopping up firewood?

There is also the knife paraphernalia. We are the proud owners of three or four sharpening systems. We have a plain whetstone for which my husband has created a wooden holder. Of course, there is a special oil for that. David’s brother also gave him a stand contraption, where you clamp the knife onto the holder and slide rods with increasingly fine whetstones across the edge. The only one I can actually use is the diamond file sharpener that we keep inside for quick, slight sharpening. Who knows? There could be others out in the garage that are used for sharpening tools and such.

We inherited the lovely butcher block knife drawer that we had given David’s parents decades ago, although it only fits small knives, and David also has a few of his dad’s knives. Since we don’t want to be sliced to ribbons when reaching for the can opener, David has made a cardboard sheath for each knife, held together with shiny brown packing tape. So, I guess it’s more accurate to say that if you looked in my kitchen drawers, you’d see a bunch of cardboard and tape. 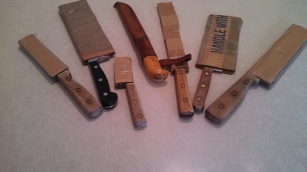 Naturally, we find it difficult to use sub-par knives, so when we go on vacation, we take them with us. Seriously. When we were at the beach with my family last Thanksgiving, my mom opened one of the drawers, saw a knife in a cardboard sheath, and held it up, laughing. “Look!” she said. “Who does this remind you of?” Everybody said, “David.” When she looked confused because no one else was laughing, I said, “It is David’s. We brought our chef’s knife.” She was stunned, but I swear, none of the other knives would cut butter. I have become a knife snob.

Funny thing is, none of the Southern guys I know have ever thought of hurting a person with a knife. You might think that I only know peaceful, sensible people, but I beg to differ. I know a lot of people who are not the least bit sensible. For Southerners, as well as for rural people everywhere, it’s more of a symbol of competence and self-sufficiency. Whether he’s mending fences or getting his new cell phone charger out of that impossible plastic bubble, a man without a knife just ain’t no kinda man.

Filed under Men and Women

4 responses to “Southern Guys and Knives”