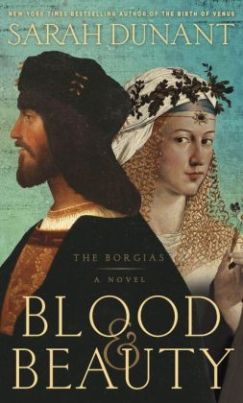 Rodrigo Borgia, also known as Pope Alexander VI, knew a thing or two about marrying off one’s children strategically in order to gain power. But wait, you say, a pope with children? Indeed, in the Middle Ages, popes held tremendous secular power, and rising through the ranks in the church was a very effective way to further one’s wealth and political standing. In her new novel about the Borgias, Blood & Beauty, Sarah Dunant portrays Alexander as a man who would argue that the rule was that priests were not allowed to marry, and he didn’t marry! However, he did have at least two long-term mistresses, one of whom he married off to a cousin and then kept for himself.

Rodrigo’s eldest son, Cesare, is the “prince” about whom Machiavelli wrote, and his only daughter, Lucrezia, has been portrayed as the quintessential evil woman for centuries, having been suspected of poisoning her husbands. (My brother used to call his ex-wife Lucrezia Borgia.) However, Dunant does not subscribe to the “wicked Lucrezia” line of thinking, but rather considers her an innocent girl who was manipulated by her father and older brother—at least in this first novel. There is a sequel to come! After all, there are far too many murders, intrigues, marriages, liaisons, and wars to fit into one novel.

Sarah Dunant is famous for her romantic and steamy historical fiction, but this one leans much closer to biography than her earlier work. Thankfully, she includes a complex family tree at the beginning with solid lines for legitimate children, dashed lines for illegitimate children, and sometimes lines that seem to cross. There is also a map of the city-states of Italy in the fifteenth century, which is helpful in keeping up with wars and marriages. This is an absolutely absorbing read filled with fascinating characters, and although I’m sure the author took some fictional liberties, the fact that these people really lived and the events chronicled really happened makes the pages turn that much faster.

I enjoy diving into a juicy historical fiction novel or biography, and lately I have been frustrated that I just can’t watch any of the historical series on TV, including The Borgias. We started to watch The Tudors, but I was shocked at how much sex and nudity there was in the series! I really don’t consider myself to be a prude, but I am floored at how casually Americans watch other people having sex these days. I am Tudored out anyway, much as I love Henry and Elizabeth. I’ve been watching and reading Tudor stories since middle school (not that they had middle schools when I was that age), and now the only other story about them that I plan to follow is the third in Hilary Mantel’s excellent series that started with Wolf Hall. By the way, I am a Catherine of Aragon sympathizer—can’t stand Ann Boleyn. But that’s another post.

If you’re ready to travel back in time with an engrossing family story full of romance, treachery, and devious characters that just happens to be true, I can recommend Blood & Beauty. I refuse to peek at the rest of the story on Wikipedia before the sequel comes out. Can’t wait!

Disclaimer: I read an advance reader copy of this book, and it will be available to the public on July 16th. My opinions are solely my own and do not reflect those of my employer or anyone else.