The Storied Life of A.J. Fikry, by Gabrielle Zevin 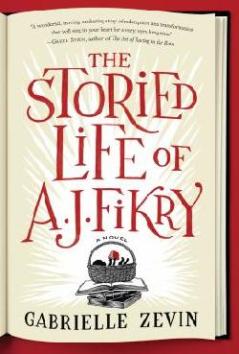 As this novel opens, Amelia is fending off a man who is asking her for a second date. They’d met online, and he’s hounding her on the cell phone. He cannot understand why she won’t go out with him again, so she reminds him that she works in publishing, that books are important to her, and that he had declared that the book that made the biggest impact on his life was Principles of Accounting, Part 2. So she can never see him again, and in that moment I knew that I would love this book.

Amelia is going to see A.J. Fikry, the grumpy man who owns a bookstore on Alice Island, a Martha’s Vineyard type of place with a large summer population and a smaller year-round community. A.J. only wants literary fiction: no genre, no children’s, and certainly not YA. Amelia is hard-pressed to sell him anything. Since his wife’s death a few years ago, A.J. has withdrawn into himself and is drinking more and more. One night, he passes out and wakes to find his rare copy of Edgar Allan Poe’s Tamerlane stolen from its climate-controlled case. Since it is worth about $400,000, he has now lost his entire retirement plan, and his life will not turn out the way he thought it would. Little does he know that so much about his life will soon change that he wouldn’t even recognize it if he could see into the future.

A.J. is surrounded by a lovable cast of characters. There’s the police chief, a non-reader who begins buying books out of pity for A.J. and ends up running a spectacularly successful book group filled with other crime novel enthusiasts. A.J.’s best friend is a writer (even though A.J. hates writers as a class) who is married to A.J.’s former sister-in-law, and then there is the most precocious and trusting little girl, who comes equipped with a highly objectionable Elmo doll. In the end, you could call this the “Feel-Good Book of the Year.” (In case you’re wondering, last year’s was The Rosie Project.)

Gabrielle Zevin has written many young adult novels , which is why it is slyly funny that A.J. finds no merit in them. Be sure to read Elsewhere, a unique look at the afterlife. I’ve read most of her other work, and when this book was announced, our adult fiction selector was kind enough to request an advance reader copy for me. Zevin writes this adult novel with the same brightness that she uses with younger characters, and it is interesting that she chose a man for her main character. Book nerds will go nuts for the little games she plays with us throughout the story, mentioning characters or plot devices of famous books, and then revealing the titles a little further on. I found myself shouting out titles: “Ooh! I know! I know!” This is a story about books and the people who love them for the people who love them.

Disclaimer: I read an advance reader copy of this book. Opinions expressed are solely my own and do not reflect those of my employer or anyone else.

Tagged as Gabrielle Zevin, The Storied Life of A.J. Fikry

One response to “The Storied Life of A.J. Fikry, by Gabrielle Zevin”