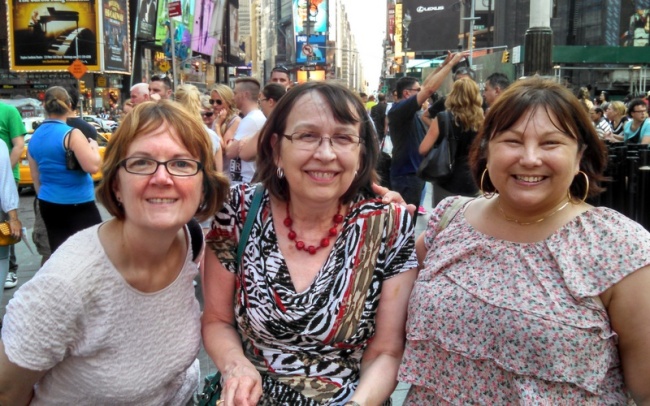 Last Tuesday, I made a trip to New York with these fine ladies for Book Expo America, a huge convention held in the Javits Center for booksellers, librarians, publishers, and other people in the book trade. New York is an exciting city of over eight million people, all of whom are walking up and down the streets 24/7. We met all of them when we decided that our first adventure would be to walk from the New Yorker Hotel on 34th Street and 8th Avenue to “the discount ticket place,” which Google told us was on 52nd Street and Broadway. It’s pretty easy to find your way around the numbered grid of streets (east-west) and avenues (north-south) until they get tricky on you and start naming the avenues instead. Despite their reputation for rudeness, New Yorkers will answer questions from strangers, such as, “Is Broadway this way or that way?” They don’t stop, of course, but they will point.

The picture above was taken just after we scored four tickets for Jersey Boys, which was our first choice. We had come up with a list of our three choices, in order, before we got up to the ticket window, because there is no waiting on people in New York. At the first sign of dithering, the clerk would yell, “Next!” and we’d be pushed out of the way.

Since we had a two-hour wait, we decided to walk around and see the sights. This is when I found out that the well-reviewed Aravon shoes that I had bought especially for the trip were not going to be kind to my feet. Granted, I bought a pair that look like pumps, and they did have excellent arch support, but I could feel blisters starting up all over. We kept on walking, and here in this vast city there would suddenly be places that made you feel as if you were in your own living room, they were so familiar.

Jersey Boys was amazing. If you are not aware, it is the story of Frankie Valli and the Four Seasons, and the actors and actresses, especially the one who played Frankie, had stunning voices. Of course, we all sang along at the tops of our voices, as did the rest of the crowd. We loved it. Sitting next to me were a mother and teenage son who were visiting from Leeds, England. They told me that the dad had decided to tour around Europe in an RV, and that was just not their thing, so they decided to hop on a plane to America and wander around New York. I can just imagine myself saying to David on a Friday afternoon, “Dahling, what say we do London this weekend?” Ah, for disposable income!

After the show, we walked to Carnegie Deli, where I had said no to a piece of chocolate cheesecake in 1998 and regretted it ever since. It was to be my one indulgence for the week, but alas, there were others. Anyhow, Carnegie Deli is well known for its gigantic sandwiches with gigantic prices to match. I ordered a Reuben that was so big that I boxed up two-thirds of it so that it could smell up our hotel room for the night. I ate more of it in the morning. (Yes, corned beef and sauerkraut at 7:00 AM.) I did order my luscious cheesecake, as well, and ended up eating half of it for breakfast, too. It was a glorious start to the day. At Carnegie, customers share a picnic-style table with total strangers, and interesting conversations ensue. I am sure that one of the older men who sat with us was famous, but I can’t quite place him.

We walked all the way back to our hotel in the dark, pushing through a relentless river of humanity, and sometimes daring to cross on the red when everybody else did. What is life without a frisson of danger occasionally? By the time we got back to the New Yorker, every single toe had a little blister on the bottom, and I found that I was not the only one who had packed Band-Aids for this very purpose. However, I was jubilant! I had accomplished two of my goals for the trip—a Broadway play and Carnegie Deli—and it was just the first day! The working part of the trip was still to come.

I plan to write up bits of the trip this week, along with book reviews and a detailed post on picture books, so stay tuned! I learned a great deal and met so many interesting people that I’d like to share with you. Wednesday was an intense session on children’s books from early morning until late at night. Fun!

Filed under Books and reading, Food