The Strange and Beautiful Sorrows of Ava Lavender, by Leslye Walton 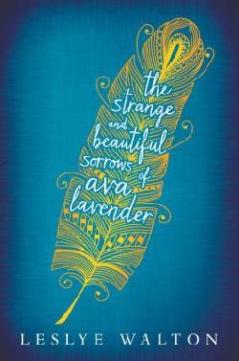 Ava sets out to tell the story of how she, who was “just a girl,” happened to be born with a full set of wings. To truly tell the story, she has to go back three generations to her great-grandmother, Maman, who moved from France to “Manhatine” to follow her husband’s dream, and then to the story of her grandmother, Emilienne, and her mother, Vivianne. Lucky in love these women were not. It seemed that they fell in love quite often, but rarely with the right man, and even then, once they had a child, he would either die or run away. So the women depended on one another and raised their children alone—at least on this plane of existence.

Ava and her foremothers eke out a living, running a bakery after they move into a lonely house with a strange history. Ava stays indoors almost all the time, just so that she can avoid other people’s sometimes startling reaction to her wings. While she is afraid that some people may hurt her because of her difference, others may be obsessed with her in a different way. All she wants to be is a regular girl.

Walton writes a story filled with magical realism. One of Emilienne’s sisters was completely in love with a musician who barely knew that she existed. Her love transformed her into a canary, hopeful that he would be enraptured by her music, but now he noticed her even less. Relatives who have died just might still be around, and the living may have powers that most people would call superstition. The lines between living and dead, reality and illusion, are gossamer-thin. The writing is exquisitely beautiful, but some of the situations are too mature for most teenagers. However, adults and older teens who love Gabriel Garcia Márquez’s One Hundred Years of Solitude or Isabelle Allende’s House of the Spirits will be enthralled with Ava Lavender.