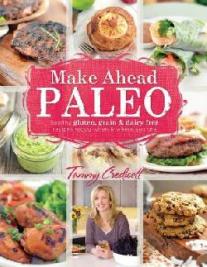 On Independence Day, as David was working his Yard Warrior routine, I was puttering around in the kitchen, groovin’ to Lake Street Dive (“You Go Down Smooth“) and whipping up five different recipes. We had David’s grandmother’s recipe, “Mama Teal’s Famous Barbecued Chicken,” on the menu, and since that naturally goes with cole slaw, which I make with my food processor’s shredder blade, I decided to get some extra work out of it and shred up veggies to make “Breakfast Muffins” from the new cookbook Make-Ahead Paleo, by Tammy Credicott.

This cookbook has several sections featuring different ways of preparing food in advance: cooking for the freezer, preparing crockpot recipes in advance, and, as in this case, prepping all the complicated parts of a recipe a day or more in advance of finishing or serving. On July 4th, I put all of the dry ingredients together in a bowl, covered it and put it away, and then I processed all of the “add-ins”—shredded carrots and zucchini, chopped walnuts, pumpkin seeds, and coconut. I covered the container and put it in the fridge for the next morning. All I had to do after that was mix up the eggs and such, and then put it all together.

Since I am a low-carber, not really a Paleo die-hard, I had to replace the maple syrup with two other ingredients. I used Splenda in the dry ingredients for sweetness, and then used coconut milk to replace the liquid. It worked perfectly. These muffins were sweet and delicious, and much lighter than I expected with all of those added ingredients. If you have children, this is a terrific way to sneak some serious vegetables into their diets without a struggle. However, I cannot guarantee success unless you listen to mellow music while you work. 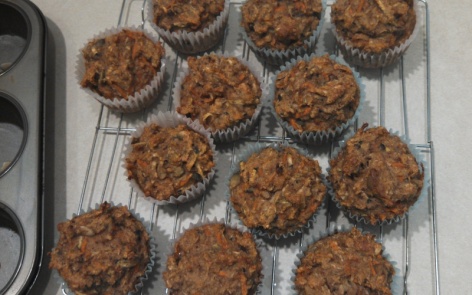 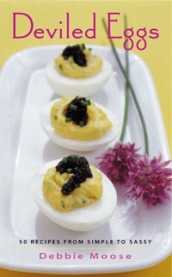 The next day, with the satisfaction of a perfectly manicured lawn behind him, David spent some time in the kitchen creating a batch of “Deviled Ham ‘n’ Eggs.” This was his second round with this recipe, as it was the first one we made when I brought the book home. David is a specialty chef. He grills brilliantly, of course, and is particularly adept with fish on the grill. He also makes breakfast every weekday morning, which is an excellent arrangement, since he wakes up perky every morning, whereas I would start to think about breakfast around 10 AM— which would be unfortunate, since I’d be at work at that point. So he gets me off to a good start every morning. And then, for some reason, he has had a fascination with deviled eggs for several years since my friend, Julie, gave me a copy of a cookbook by Debbie Moose with nothing but deviled egg recipes. David is working his way through this little gem, and we are all happily sampling the results. Lately, we’ve been traveling so much that we’ve missed our connection with Elaine, our egg lady at church, and I think we panicked and overbought eggs at the store. Time for a special recipe!

David uses our friend Darlene’s instructions for egg boiling. Darlene is a botanist from Ontario, and this method is a result of scientific experimentation from her graduate work, so we call them Canadian eggs. We do not question why botanists would need to study hard-boiled egg preparation. David puts the eggs in the pot, covers them with salted water, and brings them to a full, rolling boil. He begins timing the eggs when they come to a boil, and he boils them for two minutes. He then removes them from the heat, covers the pot, and lets them sit for ten to fifteen minutes, depending on the number of eggs. He hypothesizes that more eggs, and therefore more water, will take longer to reach a boil, so they can sit for less time. At that point, he pours off the hot water and immediately plunges them into ice-filled water until they are completely cool. Using this method, he gets perfectly cooked eggs without that gray-green ring around the yolks.

“Deviled Ham ‘n’ Eggs” is a great recipe for summer, when we have the fresh thyme and parsley growing in the garden. I will not divulge that David always has to ask which herb is which. He digs the soil; I’m the plant person. I’m not complaining. Besides the ham and herbs, this recipe calls for lemon juice, and the end result is a fresh, savory snack. The “make-ahead” element of this recipe is that you can make these the day before a picnic and they will travel well in your cooler. Again, we are not Paleo hardliners, so we ignore the dairy-free rule when it’s convenient. Here you can see some of the eggs topped with chopped parsley (the authorized version) and some topped with shredded sharp cheddar (unauthorized, but yummier). Take your pick. 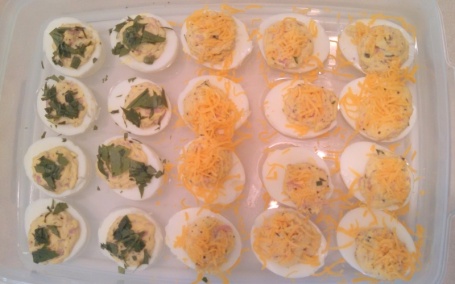 The Paleo movement continues to evolve, concentrating more on whole, unprocessed foods, rather than food that would actually be available in the Paleolithic era. Coconut aminos? Furthermore, natural sweeteners, such as honey and maple syrup, are showing up in more and more recipes, whereas Paleo cookbooks used to consider these very occasional treats. However, Make-Ahead Paleo is filled with wonderful recipes that I intend to sample, including “Macadamia, Garlic, and Basil-Crusted Chicken,” “Cashew Lime Hummus,” and “Creamy Cilantro No Potato Salad.” One brilliant feature is the “Week in a Day” section in the back that helps you to cook one day for a week’s worth of dishes. There are also resource lists, guides on how to store various ingredients, and grocery shopping and freezer inventory forms that you can download with a QR code. How well-planned is that? I can definitely recommend this large paperback cookbook to all busy low-carb or Paleo cooks. Bon appétit!

Disclaimer: I used a library copy of this book. Opinions expressed are solely my own and do not reflect those of my employer or anyone else.