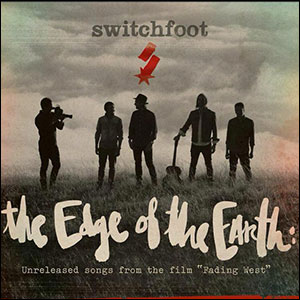 A couple of years ago, David got into my car and exclaimed, “Are you still listening to Switchfoot?” Hey, it was a different album than the last time he was in my car! As you know if you’ve been reading this blog for a while, they are my favorite band. I have listened to three other bands this week (really!), but it’s true that the inside of my car is, indeed, Switchfoot Nation.

Of course, I follow Switchfoot on Facebook, and I was elated to see that they had new music out this week! Since Fading West came out not too long ago, I was surprised, but it turns out that this EP, The Edge of the Earth, contains previously unreleased music from their recent film, also called Fading West. Now, I don’t have a lot of money to throw around, but I went to Amazon to see if I could sample some of the songs, and the entire album was only around seven dollars— and even less after my Amazon download credit. Sold!

Switchfoot has been doing some interesting things with song and album titles lately. The first song on The Edge of the Earth is “Fading West,” which did not make it to the album of that name. I am so glad not to have to keep listening to it on YouTube! My favorite song (so far) on the EP is called “Skin and Bones,” but those words do not occur in the song. I read that they were originally part of the chorus, but had been cut, but they still liked it as the title. Okay, their call. I could not make out some of the lyrics, so I Googled “lyrics Switchfoot skin bones,” and ended up with the lyrics to “Where I Belong” from Vice Verses with the line “this skin and bones is a rental.” No relation. Thankfully, I found all of the lyrics to all the songs on Edge of the Earth, along with background commentary by Jon Foreman, on the Jesusfreakhideout website. Click on the first song, and then you can click right through all of them.

Now, as if all of this excitement were not enough, I also read in the Facebook comments that their movie, Fading West, is now available on Netflix streaming! I’ve watched it twice. The story behind the movie is that the guys started thinking, “Hmm. We are not teenagers anymore. We are not even twenty-somethings. We are husbands and fathers who leave our families for long stretches of time and travel around the world to sing for adoring crowds. Are we doing this right?”* So, in order to find the answers to life, the universe, and everything, they did what you and I would do and went surfing in all of the most awesome and terrifying places on earth. “Switchfoot,” if you didn’t know, is a surfing term for putting your “off” foot forward; in other words, doing things differently or in ways that are not the most comfortable. They decided to play concerts along the way, to record a new album, and to have surfing gurus meet them on various beaches, like Bali, New Zealand, and South Africa. The landscape and ocean footage is gorgeous.

Unfortunately, the trip turned out to be much more difficult than expected, as they had to meet those questions about being a father halfway around the globe head-on. In some of the most poignant scenes, Jon’s brother, Tim Foreman, sings the lead for the first time in a song about the purpose of suffering. Like all of their music, the movie is very thought-provoking. Lest you think that it is depressing, though, there are hilarious episodes, such as when they are star-struck by some metal bands and when they discover that the South African surf is startlingly cold and full of sharks. It is mostly great fun and, of course, full of amazing tunes.

I can highly recommend, in my completely biased opinion, both the Edge of the Earth EP and the Fading West movie. Switchfoot always connects me with my better self and leads me away from the busyness of life today.  If you like great music, deep thinking, beautiful scenery, and lots and lots of salt water, you will love them.

*This quotation is totally made up, but it was something along those lines.

Tagged as Edge of the Earth, Fading West, Switchfoot