Glory O’Brien’s History of the Future, by A.S. King

Glory O’Brien is a gifted photographer, just as her mother was. She hopes that her pictures can help her to make sense of her mother’s suicide, and she has cut herself off from everyone but her grieving father and her best friend, Ellie. She worries that she is doomed to repeat her mother’s ending until the night that she and Ellie drink the bat. Yes, bat, as in flying mammal. After that, the girls acquire the ability to see a person’s past and future through many generations when they look them in the eye. This ability may sound awesome, but in reality, seeing the future can be more than a human being can bear to know. Glory begins to move through life with downcast eyes.

In the meantime, Glory finds her mother’s journal in her darkroom and starts to uncover strange bits of information about Ellie’s domineering mother, who runs the commune Ellie lives on across the street from Glory and her dad. Ellie is homeschooled, and some of her choices are taking a toll on the girls’ friendship. With no friends, unsettling supernatural abilities, unnerving discoveries about her parents’ past, and an agoraphobic dad, will Glory move toward her mother’s end, or acquire the strength to overcome it?

A.S. King is a reliably excellent young adult author. Her characters’ dialogue and mindset are authentically “teen,” and the parents are almost always fully fleshed-out characters, instead of cardboard cutouts or wicked villains, as in so many YA novels. Glory O’Brien is an essentially realistic novel with a touch of the fantastical, and the visions are dealt with as yet one more burden of the teen years.

***Rant Warning***  I do have one quibble, but it is not unique to King. Over the past few years, perhaps beginning with Jerry Spinelli’s Stargirl, authors routinely use homeschooled kids as the stock “Other” character, particularly “the feral child.” It seems that all homeschooled kids in books are raised on farms or in communes, and often have no experience of the larger world— which is odd, really, since they are not the ones locked up in a room with 30 other kids their exact same age all day long. Be that as it may, the homeschooled child or teen seems to be writers’ 21st century, American Émile. As a former homeschooling mom, I am beginning to see this as a tiresome trope. It is true that homeschooled children are not Just Another Brick in the Wall, because, after all, that is the point. However, homeschooled kids come from all kinds of families, economic conditions, and geographic areas. They move within a broad range of children and adults every day, and are just as likely to program your computer as to chop your firewood. So… let’s give it a rest, shall we?

Glory O’Brien’s History of the Future is an absorbing coming-of-age novel for upper teens to adult.

Disclaimer: I read a library copy of this book. Opinions are solely my own, and do not reflect those of my employer or anyone else. Rants are optional and free of charge.

Tagged as A.S. King, Glory O'Brien's HIstory of the Future, homeschooled characters in books, YA authors

We’ve spent two days here trying to get a respectable Christmas tree up. First came the fluffing of the branches: assembling my mom’s old artificial tree, with bits of greenery snapping off as we go along. We have a whole grocery bag full of detached fake spruce segments now. After that, it was pretty late last night when we were trying to string the lights. I said, “If we can just put the lights and the garland on, we’ll finish decorating tomorrow.” Michael was at a birthday party by this time, and David’s and my Christmas Spirit tank was on E. Plug in first set of lights: half-dead. Second set: ditto. We threw away three sets of lights.

Today, refreshed and renewed, we bought lights and all three of us gathered ’round. The lights and the garland are now on, but just as I pulled out the first package of balls, my son said, “But Dad! Shouldn’t we try to put it on the stand before we go any further, since the clamp broke?” Me, shrilly: “What? What clamp? What?” David, calmly: “No problem. I’m going to duct tape it.” And he proceeded to do just that, as you can see. Here’s hopin’.

However, decorating has come to a complete halt, since we carefully removed every hook from the decorations last year and sealed them neatly in a zip-lock bag. If you happen to see a zip-lock bag full of hooks, please let me know. We’ve searched all the way up to the attic, but my living room floor is still fully decorated with hookless ornaments. 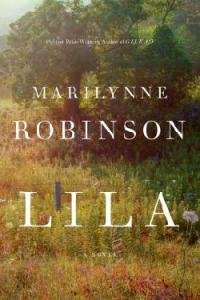 Lila doesn’t know who her real mother was, but she is forever grateful to Doll, the woman who stole her from the back porch she barely remembers and carried her around with her in a vagabond life in the 1930s Midwest. Wandering with a group of other homeless people, digging roots for food, taking odd jobs on farms or in towns, and once being left on church steps as an orphan, Lila learned how to work hard and keep her mouth shut. She had no formal education at all when she took a position as a sales clerk after she was unsuccessful at working in a brothel. After that job was over, she wandered alone, stumbling upon an empty shack near a small town called Gilead.  It was while searching for work in Gilead that Lila met her “beautiful old man,” someone who would change her life forever.

The old man was the pastor of a local Presbyterian church, and if you’ve read the Pulitzer Prize-winning novel, Gilead, you will recognize him as the protagonist of that volume. This book tells the story of his wife’s hardscrabble life up through their marriage, ending just before the action of the first book. Marilynne Robinson writes slow, thoughtful novels about faith, doubt, and transformation. Very few of her readers will have had the sort of experiences that Lila had, but Robinson allows us into this young woman’s mind as she wonders how anyone could believe in a good God in the midst of all the suffering she’d seen, and why good people would believe that those who had never heard the Gospel— which was the topic of continuous discussion among the pastor and his friends— would not be able to go to heaven. It just seemed so unfair to her, and her sudden presence in his life forced the old man to deal with topics he’d only considered academically before.

Because of Lila’s lack of trust, she is perennially considering how to run away from her marriage, and the pastor is quietly aware of her plans. The reader feels a constant dread, as our normal lives have taught us to value security, full stomachs, and deep roots. Robinson pokes us in all of those middle-class assumptions, leading us to view life through the eyes of someone equally human, but completely unlike ourselves. The homeless rarely write books.

It is not necessary to have read Gilead or its other companion novel, Home, before reading Lila, but it would enrich the reader’s understanding to do so. Robinson writes as beautifully as ever, skillfully exploring doubts and strengthening faith. Here are some lines from the very end of the book, as she waits for her husband to join her in the back of the church after their son’s baptism.

“Eternity had more of every kind of room in it than this world did…. There was no end to it. Thank God, as the old men would say….Then the Reverend came in, looking a little worried as he always did when he thought he might not have been attentive enough, and then she realized how tired she was. But she knew she would come back to what she’d been thinking about. And also to ‘the peace that passeth all human understanding,’ which was the blessing he said over his flock as they drifted out into Gilead, the small, frail, ragtag work of their hands…. There was no way to abandon guilt, no decent way to disown it. All the tangles and knots of bitterness and desperation and fear had to be pitied. No, better, grace had to fall over them…. That’s how it is. Lila had borne a child into a world where a wind could rise that would take him from her arms as if there were no strength in them at all. Pity us, yes, but we are brave, she thought, and wild, more life in us than we can bear, the fire infolding itself in us. That peace could only be amazement, too.” (pp. 260-261)

Boys of Blur, by N.D. Wilson

Charlie and his mother are back in Florida for the funeral of his step-dad’s high school coach. They are surrounded by fields of sugar cane, and it’s cane-burning time. Charlie finds out that he has a cousin, Cotton, and as the boys run through the fiery fields chasing rabbits, Charlie begins to have hallucinations about evil, undead creatures that smell horrible and bring up all kinds of anger and hatred in the humans they encounter. When Cotton brings Charlie to the sacrificial stone where dead animals are laid, the boys are surprised by Lio, a heroic young man wearing a beat-up helmet and wielding a sword. Strangely, the adults don’t think Charlie is hallucinating, and they seem to know a lot more about the area’s dark history than the boys do. As the evil creatures draw nearer, the townspeople begin to fight and riot for no reason. Cotton is badly hurt, and it’s up to Charlie to save his life by struggling to undo a curse he doesn’t understand.

Wilson draws on the story of Beowulf to craft a modern tale dealing with small-town football, family ties, and the reality of evil. Charlie’s biological father is white, and his step-father is black, and racial diversity is portrayed within one mostly loving group of people. The monsters are called “the Gren,” after Grendel, and the Grens’ mother is the power behind it all. I particularly enjoyed that the wicked mother is tall and thin, whereas the good mom, Mrs. Wisdom, is “soft” and wrinkled. Of course. This story is quite frightening at times, with breathless chase scenes and fantastical places mixing with the swamps of Florida’s sugar-cane area. Gators and Gren, panthers and burial mounds, cypress and sorceresses.

Nathan Wilson has had the sort of classical education that allows him to throw Latin phrases into his heroes’ mouths, and he writes complex books for kids who are good readers. While his prose can be beautifully poetic at times, it is always accessible to his young audience. He is a Christian, and although he doesn’t write “Christian books” (can a book be saved?), he writes with the worldview of good vs. evil and heroic virtues that will resonate with believers. It’s not fashionable these days to say “boy books” and “girl books,” but Wilson writes excellent books for boys. If you’ve been raising your kids on Narnia and Lord of the Rings, here’s your next writer, particularly his “100 Cupboards” series.

A heart-pounding story for courageous kids from nine to fifteen.