Miryem was tired of being poor. She was tired of being cold, scrounging for food, and listening to her mother cough. She had seen a better life. Her mother’s family lived in the city in an impressive house, and they gave her delicious food and fine clothes when she visited. In their little village, though, her parents were scorned and hated because they were the only Jewish people in town—and because they were moneylenders.

Panov and Panovna Mandelstam’s pity and kindness made them the worst moneylenders in the world. When her mother’s health plunged to frightening lows, Miryem took matters into her own hands and went door to door to collect the debts their neighbors owed them. She had observed her grandfather and had learned to read and do sums. The villagers found her quite intimidating. Not only did she collect payments, though, she also learned to trade shrewdly, and soon her family was well fed, and she was putting gold into a safe at her grandfather’s house. She hired servants, and their lives were changed.

Miryem’s success did not go unobserved, particularly by the king of the Staryk, an icy civilization that existed in a world parallel to hers. The Staryk usually kept to their own pursuits, but when they were greedy or irritated with the humans, one could see their frozen roads shining closer than usual to the people’s homes. One day, the Staryk king knocked on the Mandelstams’ door and handed Miryem a small sack of silver coins, demanding that she change them into gold. Miryem knew that she had no magic powers, but could only change silver to gold in the mortal way: trading material things for a higher price. When she succeeded the first time, the Staryk set higher and higher tasks for her, until the day came when he carried her off to his crystalline castle, where she would marry him, become his prisoner, and change all the silver in his kingdom into gold.

Novik, author of the bestselling Uprooted, tells this story in several voices, as Miryem’s life touches and changes many others. As forces both human and supernatural threaten to bring permanent winter to the land, Miryem bands together with the young tsarina in a fight to save their loved ones’ lives. The plan will take courage, trust in their co-conspirators, perfect timing, and the ability to move back and forth between parallel worlds without detection. Fiery demons and icy faeries move in a fantastical Russian landscape in this feminist retelling of Rumpelstiltskin.

For adult fans of retold fairy tales, this novel is fast-paced, thrilling, and even a bit romantic. Highly recommended. 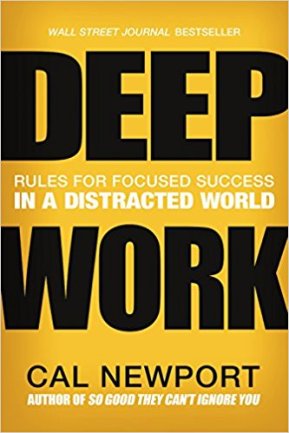 It’s hard to argue with the fact that we’re all more distracted than we’ve ever been in history. At the same time, manufacturing and other manual labor jobs are going away, and today’s worker is increasingly employed in some sort of “knowledge work.” One would assume that knowledge workers need quiet focus in order to fulfill their career missions, but the very companies that lead the field are those that promote wide open workspaces, supposedly to foster collaboration. Even in more traditional companies, an open room filled with cubicles is the norm, and employees are expected to stay connected to electronic forms of communication at all times, sometimes even at home. How can we perform deep work in this sort of environment?

Cal Newport has employed strategies in his own life that enable “deep work” in order to become one of the most productive professors at Georgetown University, publishing far more than most of his colleagues in spite of his young age. Beginning with his personal experimentation and expanding to his research on top producers in several fields, Newport has distilled his findings in this book, subtitled Rules for Focused Success in a Distracted World. He realistically offers a range of suggestions that can be implemented by people in various vocations and levels of authority. A CEO may be able to roll out a new initiative for his entire company, whereas a single employee who undertakes that same strategy on his own may find himself unemployed very quickly, so Newport is sensible about each plan’s feasibility.

One of his main points, approached from several angles, is to reduce the number of interruptions that occur in one’s day, particularly from electronic sources. On one end of the spectrum, he tells of the award-winning author, Neal Stephenson, who does not even have an email account. This is even more amazing when one considers that Stephenson is a science fiction writer. He refuses to create an obligation for himself to respond to people he does not know. This level of disconnectedness is impossible for most people, though. Rather, Newport suggests ways to limit our Pavlovian response to the “new email” signal, still responding, but remaining in control of our concentration on more important tasks. He presents questions to ask yourself about whether you should be using Twitter, routines to follow to start and end your work day, and architectural ideas for owners to build better work spaces for higher levels of production from their employees. All of his strategies can be tailored to suit a variety of vocations that would benefit from more focused time, from artists and writers to entrepreneurs and computer developers.

I first heard about this book while listening to a young pastor discuss his church growth strategy on a radio talk show. When I researched it, I discovered that it was on many lists of the Top Ten Nonfiction Books of 2017.

Newport believes that the future belongs to the most focused workers, and that they are rapidly becoming the privileged few. Deep Work will empower and encourage you to incorporate new practices in your life that will ensure that you are part of that small group.

For Everyone, by Jason Reynolds 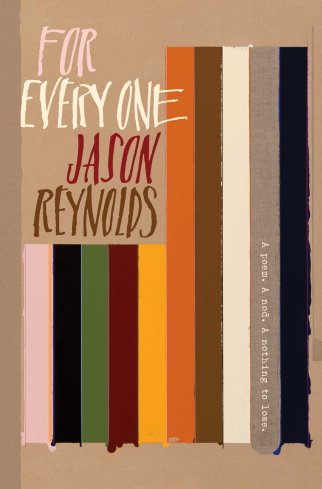 Jason Reynolds is the author of a number of brilliant novels for tweens and teens, including Ghost and Long Way Down, to name just two. I have had the privilege of hearing him speak several times, and he is always a moving storyteller, but more to the point, he reveals himself to be both a deep thinker and a hard worker.

This new title is in a different category than his novels. It made a perfect gift for a recent graduate of my acquaintance. It is a long, poetic letter to everyone who has a dream. Reynolds gleans from his own experiences for some of the content, relating the internal burning to express oneself and the collaboration with friends who are also yearning to realize their dreams. He talks about starting on his journey as a little child, but he also tells the story of landing back at home in his mid-twenties to discover that his mother, who had retired from her 9-to-5 career, had found her dream of helping children and caring for the needy. So, you’re never too old to begin. He is a creative person, but he extends the net to others who want to be athletes or entrepreneurs. He describes the fear and doubt that creep in, keeping us from leaving a place of bland security, and tells us to “jump anyway.”

Reynolds was on an author panel once when he was asked that perennial question: “What advice do you have for aspiring writers?” His answer was simply, “Do the work.” He keeps to an incredibly disciplined schedule and is a living mission statement for children’s authors. When he writes an inspirational book like For Everyone, it is not to encourage young people to keep on believing that all good things will fall into their laps. No, it is to encourage them to do the work, feed the burn, and jump anyway.

This is a small, inspiring book for all ages and all walks of life, everyone who needs a match to relight that candle. It is for everyone.

Tagged as For Everyone, Jason Reynolds

Ah, Venezia! Gondolas glide down the canals, palaces shimmer in the water, and opera maestros die between the first and second acts of La Traviata. Who did it? Was it the young, German wife? The diva soprano or her American female companion? How about the theatrical director with whom he argued just before the production began?

Never fear, Commissario Brunetti is on the case, conducting interviews between sips of espresso or prosecco. His schoolteacher wife is from a well-connected and wealthy family, and Brunetti reluctantly uses their help to gain access to the glitterati, ever aware of his own working-class childhood. Rounding out the cast are their precocious twelve-year-old daughter, an officious and politically obsequious chief, a couple of useless detectives, and several more intriguing suspects. The city of Venice is a character on its own, infusing every scene with faded glory, luxurious living, and proud culture.

Death at La Fenice is the first volume in the “Commissario Guido Brunetti Mystery” series, and the reader will be eager to return to this beautiful place with such charming characters. Signor Brunetti stands in front of his suspects, reading from the notebook he holds open in his hand, when the actual writing on the page is a list of books that he would like to read. Who doesn’t love a man who keeps a “To Be Read” list? His wife is a brilliant, refined woman with an insatiable appetite for scandalous gossip magazines. She always wants to guess the killer in his homicide cases on the very first day, and she is always wrong. Their marriage is inspiring, and they treat one another with respect and a fun sense of humor.

The suspects were a diverse lot, and I did not guess the truth until fairly close to the end, unlike my husband, who always guesses the correct answer—Professor Plum in the conservatory with the lead pipe—in the very first act. (Do not go to the movies with him. He declares it out loud.) Donna Leon has a winner of a series here. Death at La Fenice was written in 1992,  and I look forward to 26 more trips to Italy with the commissario.

Disclaimer: I read a library copy of this book. Opinions expressed are solely my own and may not reflect those of my employer.