Tell all the truth but tell it slant —

Too bright for our infirm Delight

As Lightning to the Children eased

The Truth must dazzle gradually

Or every man be blind —

Eugene Peterson, author of The Message Bible paraphrase, discusses Jesus’ parables found in the book of Luke, as well as the seven prayers that Jesus prayed in the gospels. This is ostensibly a book about language, about why Jesus spoke as he did when he walked with his disciples in Samaria. “Samaria is the country between Galilee and Jerusalem in which we spend most of our time between Sundays.” (p. 18) Peterson brings out the very earthy examples that Jesus used as he established the kingdom of heaven, and he reveals deeply spiritual insights that are as startling to us today as they were to the residents of first-century Palestine.

This is The Book that I loved this year. I was one-third of the way through it when I went on vacation in April, and I am just now finishing it in July. I only read until I felt that I was not absorbing it anymore, and then I would move on to a novel or a different nonfiction book, only to come back later, ready for more. All those familiar stories that we nod over after years of sermons, or the ones our eyes slide back and forth over as we read Luke yet again, come to life in new colors in Peterson’s meditations. Who are you in the story of the Prodigal Son? How did the story of the Good Samaritan play to its original mixed audience of Jews and Samaritans? What in the world is the meaning of that carefully-avoided story of the Shrewd Manager?

Jesus often told us truths in stories, not lists of do’s and don’ts. Stories are the way that we communicate with one another across generations, and Jesus’ stories used familiar images that light up our imaginations, eschewing cold analysis and pulling us into the action, engaging the heart and the mind. 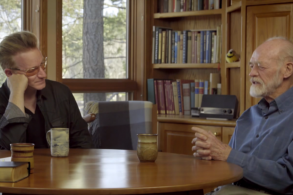 I am not a big fan of The Message Bible, although I use it sometimes to get fresh perspective on a too-familiar or confusing passage. Peterson is known in some circles as a controversial theologian, a pastor in the Presbyterian Church USA, someone who does not mind stirring the pot. I fell in love with this gentle soul, however, when I saw him on YouTube with Bono. They have an enthralling discussion on the Psalms, and we see Peterson and his wife as a soft-spoken and kind older couple, serving homemade cookies to an Irish rock star in their rural Montana home, where Bono came on pilgrimage. Here in Tell It Slant, Peterson’s language reveals an intimate relationship with Jesus, a deep life of prayer, and decades of thoughtful meditation on the scriptures. No controversy here; just drink in his wisdom.

I cannot recommend this book highly enough. Be sure to buy your own copy– it’s an inexpensive paperback. You’ll want to spend some time in these pages.

Disclaimer: I own a copy of this book. Opinions expressed are solely my own and may not reflect those of my employer or anyone else.

Bridge of Clay, by Markus Zusak

There were five of them, the Dunbar boys. Their mother had died, their father had left, and they communicated their anguish and fierce love through their fists. Matthew, the oldest, tells the story of how he taped up Clay’s feet so that he could run punishing, barefoot races where Rory cursed at him and tackled him on the track. Meanwhile, Henry piled up gambling wins, and Tommy, the youngest, added one pet after another to his menagerie. They couldn’t seem to finish high school, but they could all play the piano. Their mother had seen to that. She had also soaked them in the words of Homer, just as her father had read the Iliad and the Odyssey to her before he planned her flight from the Nazis of Europe to her new home in Australia.

In his first novel in over a dozen years, Markus Zusak courses through the generations of one family, weaving a web of strings that all find their end in Clay, the sensitive, quiet Dunbar brother, the one who loves his parents’ stories and treasures them up in his heart. Clay, who brutally abuses his body when he runs, fights, and works. His brothers say that he is “in training,” but to what purpose? His brothers don’t even know how much he loves Carey, the new girl who is an apprentice jockey at the downtrodden racetrack near their house, or how he meets her every Saturday night in the middle of a field, chastely exchanging hearts and dreams.

This is a thoroughly male story, and even the wonderful female characters are seen through the eyes of the men, who are honorable, angry, heartbroken, loving, and tough. As Matthew’s account moves backward and forward in time, certain motifs run throughout the book: Homer and racehorses, music and Michelangelo, painting and clothes pegs. The animals all have Greek names, beginning with Hector the cat and ending with the inimitable mule, Achilles. The Monopoly games are epic. Male habits that confound women are brilliantly portrayed, such as talking to one another side by side while looking away into the distance or punching a brother instead of saying, “I’m sorry” or “I love you.” As a matter of fact, the unapologetic level of testosterone is startlingly outside of today’s gender-fluid YA literary norms. Furthermore, this novel deals with far more mature themes than are usually found in teen books, such as terminal illness, marriage, divorce, guilt, and life-changing regret. Death is almost as much a character in this novel as it was in The Book Thief. 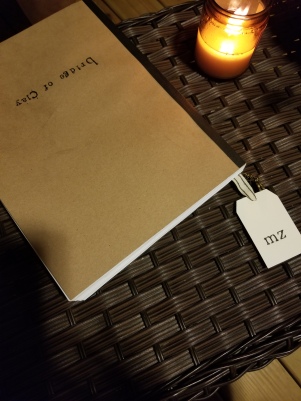 I first met Markus Zusak at the ALA convention in Washington, D.C., in 2007, when The Book Thief won a Printz Honor medal. That was a banner year for the Printz reception. The winner was Gene Luen Yang, the first author to win a Printz for a graphic novel, and the honor recipients were Zusak, John Green, Sonya Hartnett, and M.T. Anderson. At that time, the Printz Committee had all of the authors give speeches, so we were agog. Even before that evening, however, the Mock Printz Club from our library— almost all teenage girls— met Markus in the lunchroom, and since all of the seats were taken, he asked  whether he could eat lunch with us on the floor in the stairwell. Um, yes! You have never seen such a group of giddy girls—older and younger—and he was completely kind and chatty. It was the highlight of the conference.

Zusak’s style in Bridge of Clay was beautiful, and I enjoyed all of the story, but the ending slew me. I had no idea of what was coming, so gently and shockingly, and it took me a long time to recover. Everything fell into place, and I just loved those Dunbar boys.

Disclaimer: I read a bound manuscript of this novel, sent to my colleague by the publisher, and ever so generously lent to me first. Bridge of Clay will be published in October, 2018. Opinions expressed are solely my own and may not reflect those of my employer.