We Went to a Famous Restaurant! 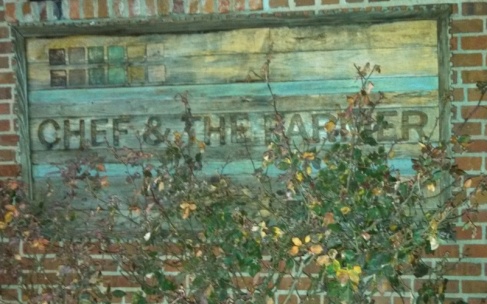 David and I celebrated our thirty-fourth anniversary Thursday night at a restaurant we’ve known about for a long time, but had never visited before. I know what you’re thinking: “Thirty-fourth? Cheryl, you must have been a child bride!” It’s true. I married when I was five years old. Soon, I will have to start saying that I married before I was born.

Anyhow, back to the restaurant. Last fall, David and I watched the PBS reality TV show A Chef’s Life, not only because we are total foodies, but also because each episode featured a different local food product. We are all about local agriculture and very proud (adopted) North Carolinians, so even though I normally will not watch reality TV, we enjoyed this series very much. Every week, the star greeted us with, “Hi, I’m Vivian, and I’m a chef.” Then Vivian Howard told us all about her restaurant, her husband, her twins, her community, and, most importantly, her food. Vivian is from eastern North Carolina, but she left home to go to culinary arts school, met her chef husband, and worked in famous restaurants in New York. When her parents offered to buy her her own restaurant, but only if she moved back home, Vivian was torn. Having her own restaurant was her dream, but living back in eastern North Carolina was her nightmare. In the end, obviously, she opened Chef and the Farmer in Kinston. 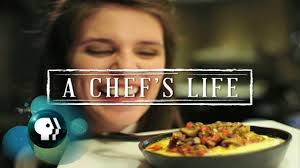 So, last night, David and I found ourselves driving away from the Triangle on Hwy. 70 into… a lot of empty highway. What is wrong with this picture? After driving through Goldsboro and out the other side, we finally found Kinston, turned left at a surprisingly hoppin’ ABC store, and there, in a big, brick building was our destination, as our GPS service announced. We weren’t sure that we were in the right place because the TV show features the other side of the building on the opening credits, so we walked up to it before we saw the sign, above.

The interior is dimly lit, with clean lines and beautiful woodwork. There is a bar on one side, with customers eating full dinners at the bar, tables on two levels in the center, and an open kitchen with a counter in front on the other side. All of the artwork on the walls was done by Vivian’s husband, Ben. We were on the slightly raised upper level, right at the rail. I asked permission to take pictures, and then found that my Motorola Razor flash has movie-production lights that stay on for what feels like forever when the room lights are low. You can imagine how mortified I was by the fact that every face in the room turned toward me, and I’m sure I had a neon sign over my head saying “Tourist!” And it wasn’t even worth it, since the pictures of the room didn’t turn out.

The wait staff was superb. I’ve been to restaurants where the waiters act as if they wish the customers would leave, and others where they were so chummy that they carried on long conversations and even sat down with us! All of the staff here were friendly, but professional. Our waiter was knowledgeable about every dish, suggested wine pairings, and waited patiently for us to make decisions. Dirty dishes were whisked away, unneeded flatware disappeared, extra flatware appeared before the corresponding dish arrived, water glasses stayed full, and they never interrupted our conversation. 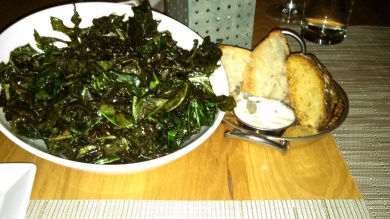 We started off with fried collards. Now, I have tried baking collards before, but the results were mixed. Some of them turned out right, but some were still mushy and some were tough. Vivian must use baby collards and put them in a deep-fat fryer. They were so light and crispy, with just enough salt, and they collapsed into collard essence in your mouth. Don’t you love the bowl? We didn’t prop it up; it is made to tilt to one side. I want one. The bread was great—David had seconds. One was rosemary and the other was sweet potato and caramelized onion. I tried both, and the sweet potato one was like dessert, rich and sweet. 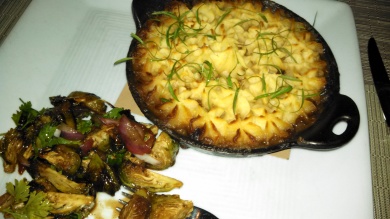 I thought I was going to stick to my low-carb eating plan, but that did not work out. It plainly states on the bottom right corner of the menu: “no substitutions.” So when I ordered the short rib and root vegetable shepherd’s pie, did it occur to me that shepherd’s pie is always topped with potatoes? No, I had a brain hiccup. I’m not exactly sure what short ribs are (why are they short?), but we decided to order adventurously. The meat mixture was thickened with a sweet potato, rutabaga, and sunchoke purée, and it was perfect for a winter night. The side dish was a roasted Brussels sprouts salad, and as I am one of the five people in the world who think of Brussels sprouts as a favorite vegetable, it was a fun new way to enjoy them. 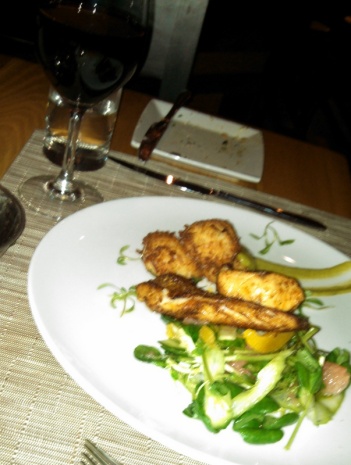 David had spice-rubbed striped bass, with ambrosia, watercress with coriander vinaigrette, and coconut rice fritters. We shared bites, of course, and I can tell you that this is not your mama’s ambrosia—no mini-marshmallows here. No, no. This was a delicately sweetened dish of varied citrus, including grapefruit, and the salad featured very thinly-sliced cucumber and fresh herbs. One bite of the crisp cucumber brought back the tastes of spring and garden-fresh vegetables. The bass was cooked to perfect doneness and not a moment more, and the coconut rice fritters had a light crust, but were creamy and slightly sweet inside. I can completely understand why there are no substitutions. The various elements of the meal are designed to complement and enhance one another. I’d love to taste this meal again in the summer.

While we ate, Ben wandered around, chatting with customers. We could see Vivian in the kitchen, and she sometimes came out to talk to people at the counter. We did not meet either of them, and I like to think that it has nothing to do with my cell phone camera. When I asked, the waiter told us that there will be two more seasons of A Chef’s Life, and that they are filming the next season right now. So, if you see someone looking starstruck and taking embarrassing photos, that would be me.

We took home our desserts (hey, I ate potatoes, so may as well) and ate them by the fire in our living room. I could not take pictures, because David’s latest craze is ambiance, which we pronounce like the French, “ahm-bee-ahnce,” and it basically means “dark, with fire.” However, we had the chocolate mousse cake, which comes with pomegranate-buttermilk sorbet, but we ate that at the restaurant. The cake was so incredible that it completely redefines the whole category of “cake.” The cake layers were fudgy, with the fluffy mousse filling in between, and it had this syrup over it that was called “warm fudge,” but there was something else, too. Pomegranate, perhaps? I hate to say, since I didn’t ask and couldn’t even see it, but we said, “Oh, wow!” several times while we savored every bite. 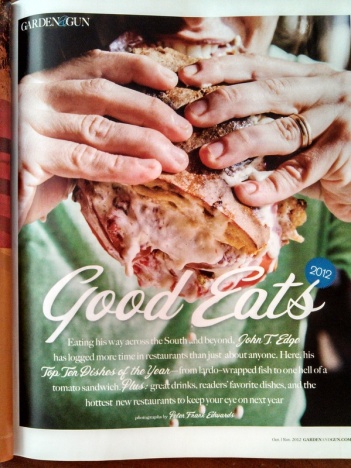 Although we first heard of Chef and the Farmer through PBS, we realized later that it had been featured in Garden & Gun, the magazine we love whose title shocks Northerners every time. We thumbed back through our copies, and there in the October / November 2012 issue was the close-up of Vivian’s hands holding a dripping, gourmet tomato sandwich. David wants to go back during tomato season. There was a wall at the restaurant with framed photos of their many magazine and newspaper reviews, and the News & Observer recently announced that Vivian Howard is a James Beard award semi-finalist again this year. They have also won many other awards, and you can learn all about them and see their menu, which changes constantly, on their website at http://chefandthefarmer.com/.

You simply must go. There is nothing ordinary on the menu. Even if the food is something you grew up with, Vivian will envision something unexpected and make it extraordinary. Be sure to make reservations in advance, which you can do on the website. The reason we went on a Thursday is because there were no tables available on Friday or Saturday until 10:00. Perhaps two weeks in advance will be enough. If you normally dine at Golden Corral, be prepared for sticker shock. Dinner with one glass of wine apiece and dessert will run over $100 for two people, plus tip. It’s worth it. It took us a little over an hour from Clayton, so I’d allow an hour and a half from Raleigh, and it’s an easy drive. Do not use a Motorola Razor camera; try something less spectacularly blinding. Dress is casual; I mean, it’s Kinston. Vivian and Ben have opened an oyster bar across the street called The Boiler Room, so if you are an oyster fan, you can try that instead. 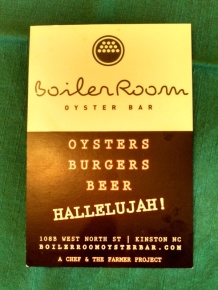 Next year, I’d like to go to Paris for our 35th, so you have plenty of time to send donations. You can make a monthly pledge! I promise to send a postcard. I have one right here from the Boiler Room.

Tagged as A Chef's Life, Chef and the Farmer, NC restaurants, Vivian Howard