Librarian Shoulder and Other Hazards of San Francisco

The last week of June, I made my way to California for the first time ever! The American Library Association held its annual convention in San Francisco this year, and I was thrilled to be invited to several functions by various groups. Since I left North Carolina when temps were over one hundred for days on end, I walked for miles on the waterfront (just days before Kate Steinle was shot there) and all over the city, reveling in sunny, mid-sixties weather. It didn’t occur to me that the sun is still sending out those UV rays even when it feels great, and I ended up peeling for a week.

The Ferry Building, located at the “bottom” of the waterfront, now a foodie paradise with lovely shops. I walked for hours on the waterfront!

One of the best things about library conventions is that all of the publishers are there, handing out advance copies of their newest offerings. They know we can’t wait to get our hands on them, and they’ve become convinced of our canvas bag addiction, so I ended up walking for miles with canvas bags full of books on my left shoulder. By the end of my trip, I was having a hard time sleeping on my left side, and I ended up taking aspirin every night before bed. Little did I know how serious that would become after I got home.

The iconic Phelan Building, which I passed every day on my way to ALA workshops.

Of course, the last week in June is Pride Week in San Francisco—every year. When I opined to someone that perhaps the American Library Association could have picked a more propitious week to pour several thousand librarians into a city that would soon receive 500,000 extra visitors for the Pride Parade, I was informed that the ALA holds its annual convention the last week of June every year. I can’t say that they should have held it elsewhere, though, because San Francisco is incredibly beautiful and easy to navigate, despite the one of the worst homeless problems I’ve seen anywhere—and I’ve spent a good bit of time in New York. The architecture, the Bay, the weather, the cable cars, and the variety of cultural influences all combine to create a charming city, and even though my hotel was lovely, I always wanted to be outside. Plus, it’s very healthful: considering that a salad costs $30, I lost five pounds that week!

“When the lights go down in the city, and the sun shines on the bay….” Sunrise from my hotel window.

Getting outside on Sunday was a problem. I stayed at the Hyatt Regency, with gorgeous Bay views like the one above changing all day and night. I had an important meeting across town on Sunday afternoon, but when I got out of the shower and opened my drapes at 7:00 AM, the parade crowd was already forming, and by 9:00 AM, I could not get out of the hotel. No public transportation was running near us, so I sat back and watched for a few hours. Since the Supreme Court decision on gay marriage had been handed down on Friday, estimates were that over a million people had come to the city, double what had been expected. Some of the texts that I sent to my family back on the east coast were: “There is a very large, tattooed male motorcyclist below my window wearing a fluffy, lime-green tutu.” “There is man on the street below me wearing nothing but a hat—and it’s 58 degrees.” My sister texted back, “Where are the police?” I said, “In the float behind him.”

Around 12:30, the floats behind my hotel ran out, and the beginning of the parade moved down one block, so that the cable car beside the hotel started to operate again. I ran down and asked a native whether it went to the Sir Francis Drake Hotel, and she said it would get me within three blocks. Great. I had intended to ride a cable car once during my visit as a touristy thing, but I ended up using them twice out of necessity. This car took me to the top of an impossibly steep hill, and then I had to turn left and mince my way ever so slowly down (and I do mean down) three blocks of sidewalks that had been grooved so that pedestrians would not fall on their faces and roll all the way down. 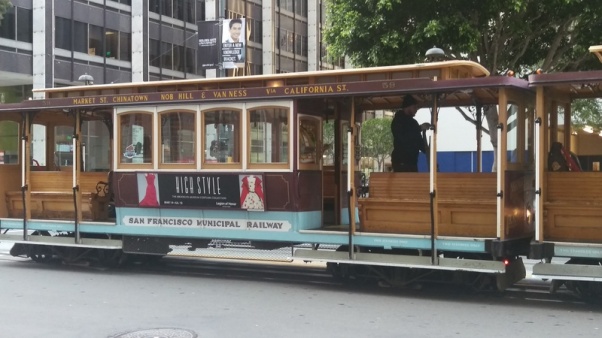 I made it on time to my 1:30 meeting, but when we got out at almost 3:00, the parade was still going on—five hours after it started!—and I ended up walking back to my hotel right through the parade crowd. Again, there goes my shoulder, but who notices the pain when there is a 300-pound, hairy man walking toward you, wearing nothing but a strategically-placed rainbow-colored sock? I just let him have as much sidewalk as he wanted.

The whole day was surreal. It’s like your hometown parade on crack. Here comes Pacific Electric and Gas, followed by Dykes on Bikes. There, in the convertible, is a local politician, doing her best Queen Elizabeth wave. Right behind her is the Bondage Group, carrying whips and waving the Bondage Flag. (Yes, there’s a flag.) Here are hundreds of Apple employees, all in white, and next comes the nudist group, carrying a banner that reads: “Saint Francis was a nudist.” Someone should tell the Franciscan Friars. Think of all the money they could save on those brown robes and rope belts. Some of these guys are far, far past the age when they should be seen in public naked. Do they not have any friends to say, “Dude, this look is just not working for you anymore”?

After all that excitement, I spent my last day with my friend, Valerie, having the total tourist experience. We went over the Golden Gate Bridge, drove through Sausalito, and had dinner on the Pacific at sunset, each view more beautiful than the last. If you have not been to San Francisco, let me recommend June and July as perfect months to visit! I was not sure how I would fare, since I was still in deep mourning at the time, but there was enough beauty to salve my soul and enough activity to keep me attached to the living. But then, that was before I knew that I would pay for ignoring the pain in my shoulder when I got home!

Filed under Books and reading, Life's Travails- Big and Small