Tag Archives: Be the Bridge

Be the Bridge, by Latasha Morrison 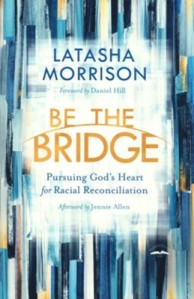 Latasha Morrison, a North Carolina native, moved to Austin, Texas, to serve on the staff of a huge church. She was the only person of color—not on the staff, in the whole church. No worries, she was up on White culture. She watched Gilmore Girls and Friends and sang Hillsong tunes. However, at one point, while talking to her father on the phone, she realized that she had not seen or talked to a Black person in over a week. After a few well-meaning but cringe-inducing conversations with people in her church, she realized that White people did not understand Black culture at all, and when she decided to gently educate them, she realized that she didn’t, either.

Neil Gaiman once said, “Like all oppressed people, [they] know more about their oppressors than their oppressors know about them.”* He was speaking of children, but it applies universally. For their own safety, the oppressed study their oppressors carefully, but since the powerless seem unimportant, the powerful do not care enough to learn about them. Latasha realized that her ancestors’ history had been erased from all of the textbooks that she had used in school. She was told that her forebears were sharecroppers, but there had to be more to it than that. She set out to learn her own rich and tragic history, and the reader of Be the Bridge will learn with her.

This book is designed to be used by the more than a thousand groups of “Bridge Builders” that Morrison’s ministry has created, so a list of discussion questions closes each chapter. In addition, there are prayers for the various topics, as well as a few liturgies that the groups can follow. The book does not have an instructional tone, though. Morrison is an enthralling storyteller, relating episodes from her own life and from history. She also brings in the perspective of various people from Bridge Builder groups that may mirror the experiences or feelings of her readers.

David and I read this book aloud and discussed our own encounters with racism and race relations from our childhoods in the segregated South to the present. Although we did not agree with all of Morrison’s conclusions and prescriptions, we learned an enormous amount about Black history. Just one example is the Tulsa Massacre of 1921, a horrifying event that marks the first time the federal government dropped bombs on its own citizens. Neither David nor I had ever heard of it. There were many other such revelations in these pages, as well as encouraging stories of people who are taking steps to overcome the damage of our past.

I picked up this book shortly after the George Floyd tragedy, at a brief moment in time when the nation seemed ready to openly examine our past and to listen to the voices of those who were peacefully protesting injustice. That hopeful moment has since been burned in the flames of rioters and stolen by the crimes of looters. However, the church must always be about the work of reconciliation and justice, eschewing partisan politics and rising above the headlines of the day. Morrison’s book was written in 2019, before Floyd’s death and before the Coronavirus lockdown changed our perspective on normal life. Churches everywhere are engaging in Bridge Builder groups. Morrison reports that 92.5% of America’s churches are completely segregated. It is way past time for us to admit that this is not normal and cannot possibly be God’s will for His people.

Whereas David Swanson’s Rediscipling the White Church (reviewed here) is meant more for pastors and church leaders, Be the Bridge is for all Christians who want to understand the suffering of Black people in America and to see the church in the forefront of reconciliation.

Disclaimer: I own a copy of this book. Opinions expressed are solely my own and may not reflect those of my employer or anyone else.