It all began with literary classics, and I said “Are you kidding?” to War and Peace for infants. The only people who want their six-month-old to read Tolstoy on 32 board pages are yuppies who are obsessed with getting Suzie into an Ivy League college before she can tie her own shoes.

I mean seriously, Wuthering Heights? Babies need time to understand that most people—hopefully including Mommy and Daddy—have nice, normal relationships before they learn about creepy guys who dig up their beloved’s grave in order jump into her moldering, beetle-crawling arms. Call me old-fashioned, but I think kids should at least be toddlers before they are confronted by such deviance.

So I ignored the whole phenomenon of academic board books for a long time. Not ABC’s and 123’s, which are the traditional domain of board books, but nuclear physics, engineering, and the intricacies of manipulating RNA, for sure. 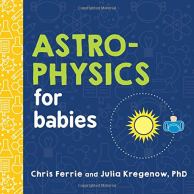 Then one day, I received a request for Astrophysics for Babies. Really? I thought, but I bought it.  “Who will check this out?” I wondered.

Everyone. Everyone checked it out. All of the excellent, education-minded parents where I work checked it out. My friends with little ones checked it out, too. I tried a few more: organic chemistry, robotics. Forty copies of every title, all checked out. 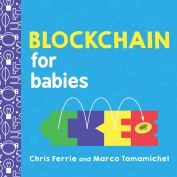 Publishers knew that they had struck gold and launched new series, and I kept buying. Finally, one day, I took a look at the books that had just been unpacked and thought, “Blockchain for Babies. I have never understood blockchain.” So I opened the book and read 32 board pages about it, and now I get it. No kidding. I couldn’t work with it professionally, but I get the concept and can discuss it without embarrassment. Now I’m a believer. All adults should read board books about Ph.D.-level topics.

Our latest batch of board books is about famous philosophers: Aristotle, Socrates, and so on. I checked out the one on Simone de Beauvoir, who, according to this volume, believed that everyone is equal, that everyone should be free to be themselves, and that everyone should be nice. In children’s biographical literature, all heroic people of all times thought that everyone should be nice. To the relief of parents, nothing is mentioned of Simone’s eclectic romantic pursuits, including her humiliating relationship with Jean-Paul Sartre, who was repeatedly unfaithful to her and seemed to undermine everything she had to say about women’s equality. (French wine, berets, and cigarettes sold separately.) However, let me point out that Sartre is not one of the philosophers highlighted in this series (so there), perhaps because his existentialist viewpoint is difficult to explain in 32 or even 3200 pages, but has lately come to have some connection to climate change.

I highly recommend that parents of precocious children should acquaint themselves with world philosophy by reading board books and children’s nonfiction in general. That way, when your seven-year-old comes home from Harvard for Christmas break and mentions studying Descartes, you can nod sagely and intone, “I think, therefore I am,” and he will believe that you know what you’re talking about. It’s not until he is ten that he will roll his eyes, take a drag from his Turkish cigarette, and groan, “Oh, Dad. I know you read that in a board book.”

Disclaimer: I have read a boatload of these adorable little books as library copies. Opinions expressed are solely my own and may not reflect those of my employer or anyone else.