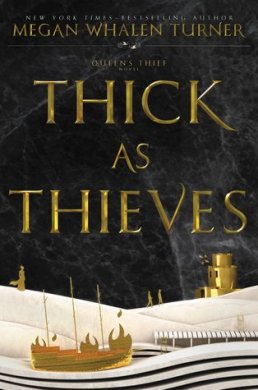 Although he was a slave, Kamet was more than satisfied with his life as secretary to the brother of the heir to the throne of the Mede empire. He is well-educated, well-dressed, and well fed. He is even amassing his own personal library, and when the new emperor ascends to the throne, who knows? He may be given to him as a gift. Aside from the occasional beating, Kamet was a man of authority.

When his beloved Laela pulls him aside in the hallway to whisper that their master had been poisoned, he panics. Slaves are always tortured when a murder has been committed, and many are killed when their masters die of any cause. Kamet decides to accept an Attolian’s offer to help him escape, leaving all of his possessions behind. This journey has none of the royal accoutrements to which Kamet is accustomed; there is hunger, danger, and endless fatigue. Furthermore, Kamet had only intended to escape his master’s guards. Now he has to figure out how to escape from the Attolian.

Thick as Thieves is the latest volume in the brilliant, award-winning “Queen’s Thief” series by Megan Whalen Turner. Although this book stands on its own, readers of the earlier episodes will recognize Kamet as a minor character whose life now moves to the center of the action. The identity of the man called “the Attolian” almost all the way through will slowly become clear. After Kamet endures experiences that change him into a much wiser man, the reader will delight to see many earlier characters gathered together to resolve the mystery of why an officious, little scholar would be so important to an enemy king.

“The Queen’s Thief” remains one of my favorite series in young adult literature. I have reviewed the entire series here. I am looking forward to meeting Megan Whalen Turner at Book Expo in New York next week, and I’ll be sure to ask her several nervous questions about the fate of a couple of my favorite characters. Some of her hints at the end of this book have me on pins and needles!

Disclaimer: I read an advance reader copy of this book, although I hope to obtain a signed copy next week! Opinions expressed are solely my own and do not reflect those of my employer or anyone else.