My dad loved football. All of it. If there was a game on from Saturday morning until Monday night, he would watch it. Oh, yeah, he had his favorite teams—the New York Giants, the New England Patriots, and Notre Dame—but he wasn’t too picky. He came home every Friday night with a block of Swiss cheese and a bag of potato chips (great for his high triglycerides) and settled in. Daddy had a Man Cave before the term was even invented. When we lived in New Jersey during my teen years, we had a half-basement about six steps down from the main floor, decked out in dark wood paneling, red fuzzy shag carpeting, and black leather furniture. Hey, it was the ‘70s.

My mom was conspicuously absent during the games. From what I can remember, she was doing housework upstairs all the time, but since my mom considered housework a hobby, no one really noticed. Since my mom didn’t eat sweets then, she always asked me to bake the cakes and such, which is why I could make a million desserts by the time I married, but couldn’t make anything more challenging than burgers for the main course. Now, this was before the time of cable TV, and for those of you who are too young to remember, any little thing threw off the reception. One day, my mom asked me to make a cake during a game and then disappeared. I was beating the batter well when my dad came pounding up the stairs, yelling, “You’re doing that on purpose! Stop it right now!” I had no idea what he was talking about, but apparently the mixer was destroying his chances of seeing any of the action on the field. I’m sure that my mother was not aware of this problem, or surely she would never have asked me to do something that would mess up my father’s football game. 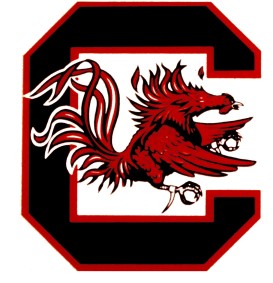 A couple of years ago, Mom mentioned that if she had one regret in her marriage, it was that she never tried to learn about football and spend some time with my dad enjoying the game. Mom lives near my sister and her husband, and Karen is a natural athlete who has always enjoyed sports and is a big football fan. I’m sure that her observation of my sister having fun watching the game with her husband made my mom thoughtful, and for me, her statement was a huge wake-up call. I have never cared about sports at all, and although my husband is not quite as big a fan as my dad, I could see that my resentment of his time spent watching sports would cause me to end up with the same regrets as my mom. Time for a game change!

It’s not as if there was nothing that one could enjoy about football, no matter who was playing. For example, I am very fond of special cocktails and tailgating. I decided to at least look at the screen while sipping and munching to see whether I could learn something. My husband has been a very patient teacher, and he really does like for me to stay with him during a game. I was afraid that he would react the way Raymond did when Debra decided to take up golf so that they could spend time together, and Raymond tried hard not to show her that she had just ruined his “me” time. David is also more willing not to watch every single game indiscriminately now, since he knows that I’m not just being negative and grouchy. We have our special teams, and we keep up with them, but that’s about it.

Well, it has been quite a learning curve. Imagine my surprise when I first found out that those bright yellow lines are not painted on the field! They keep disappearing and showing up somewhere else, and the players can’t even see them! Two weeks ago, I learned that a “pooch kick” is “less than a bunt.” OK. I still do not understand the penalties. Today, for example, there was a penalty for holding, and I asked David what that meant. He said that one player had pulled on the shirt of another player, which kept him from doing what he was supposed to do. “But,” I said, “Isn’t that the point?” I don’t understand “pass interference,” either. Don’t you want to interfere? It seems that you are only allowed to stop the other team in prescribed ways, not just any old way. I don’t know all of the positions yet, but I do now know that only half the team plays at one time; the other half is sitting on the bench. I guess I just thought that they had different jobs, depending on whether they had the ball or not. Now I realize that they do something or nothing, depending on whether they have the ball or not.

My dad was an only child with two very low-key parents, so when he watched football, he was quietly intense. David, on the other hand, is the youngest of three boys with a boisterous father. The first few times David and Daddy watched football together, I was terrified that my dad would not be able to handle David constantly coaching aloud, leaping out of his chair, and yelling at the screen to either cheer or berate the team. When I looked at my dad, though, he was smiling. Maybe he felt that David was expressing all of the emotions that he felt obliged to bottle up inside. Of course, David was an excellent sport, immediately adopting all of my dad’s teams as part of the marriage contract. To this day, David is a Red Sox fan in baseball, which is a great thing this year.

Of course, my timing couldn’t be worse. I am taking up football just when the rest of the world has decided that it should be eradicated because of the head injuries. I have to admit that the number of injuries sustained each week is shocking. So far, though, I have only seen knee injuries, but they are sickening to witness. Especially when it’s someone on our team that I’ve gotten to know. I refuse to allow this to stop me, though, since I can see that this has always been part of the game. I’ll buy books about concussions for the library, and continue to cheer for the home team on weekends.

Speaking of injuries, this is definitely an area in which men and women differ. We are usually watching the South Carolina Gamecocks or NC State Wolfpack, and my son is older than the current players. When I see a boy on the field who is hurt so badly he can’t get up, I get all mothery and practically cry. David usually says, “Oh, he’s alright.” He sees him as a football player, and I see him as a child. I even felt bad for the Missouri kicker who missed the final field goal last week. “Oh!” I said, “His whole life might be defined by this moment! They lost the game because his kick was just a few inches to the left. No one will ever let him forget it, poor thing.” “But,” David replied incredulously, “We won!” I just don’t have the killer instinct.

So, now that I am a football fan, my sister and I are planning a tailgating dinner at her house during the holidays. I am still better at snacks than sports, although I did achieve a milestone last week when I was talking to Karen and she said, “Oh, who was that guy who was with the team last year and went pro this year?” and I said, “Lattimore?” Neither one of us could believe that I knew that. This year, however, my sister and her husband have experienced the grief of having a daughter go off to college with their arch-rival. Yes, that’s right: Clemson. Now they have to wear orange and cheer for their lifelong enemy. How gut-wrenching for them. We all feel terrible, of course, but we don’t talk about it much since we know how painful it must be. We’ll all be together this Thanksgiving weekend—even the traitor daughter— for the biggest battle of the year:  the annual Clemson-Carolina game. Pray for us. Family loyalties only go so far.

Filed under Family, Men and Women