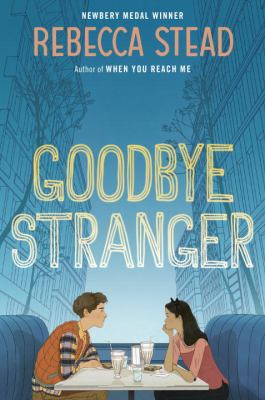 Bridget roller-skated right into an oncoming car when she was eight years old. It’s a wonder she survived, and her doctor told her that she must have been put on this earth for a reason. She’s still searching for that reason.

Now Bridge (not Bridget!) is in seventh grade, wears a headband with cat ears all the time, and sometimes freezes before she crosses the street in her New York City home. One of her best friends, Emily, has been launched into puberty well before her classmates, and is suddenly the focus of many boys in their school, including an older boy who encourages her to send pictures of herself via text. Bridge’s other best friend, Tabitha, has become the devoted follower of a stridently feminist teacher. Tab now views all of her friends’ actions through a critical lens and is passionate about social activism. Bridge is struggling to adjust to all of the changes in her relationships, but one thing she knows for sure: her friendship with Sherm is just friendship. They are not boyfriend and girlfriend. No, certainly not.

Rebecca Stead, the Newbery-winning author of the brilliant When You Reach Me, tells this story in three voices. The chapters are mostly the third-person narrative about Bridge and her friends, interspersed with unsent letters from Sherm to his grandfather— who recently left his grandmother after fifty years of marriage—  and chapters from an unknown narrator, written in the second person. It was somewhat startling to turn the page and read that second-person voice for the first time: “You should have known about Vinny. You did know.” (p. 20) The identity of the speaker remains a mystery until almost the end of the book.

On one level, this is the tried-and-true middle school novel: growing up, navigating family problems, old friends becoming strangers, the first consideration of romance, and wondering whether you are still the same person you were in third grade. Stead, however, raises that level because of her well-developed characters, the unexpected rotation of the point of view, and the introduction of issues that are unique to this generation right this minute. Sherm was probably my favorite character. He is smart and loving, but so wounded. He is just at an age where he can begin to understand his grandmother’s pain and recognize her dignity, and he is determined to be righteous and true to her.

This is one of my favorite Newbery contenders this year, and it would be a great read for anyone ten and up. Highly recommended.

Disclaimer: I read a library copy of this book (which means I bought seventeen of them). Opinions expressed are solely my own and do not reflect those of my employer or anyone else.