The Marshmallow Test, by Walter Mischel 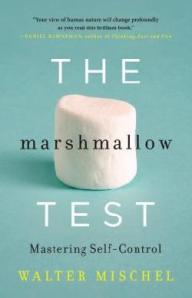 Walter Mischel is part of a team of researchers who have been conducting experiments in which they tempt small children with goodies that they shouldn’t eat. He has been doing this for decades, which would put him in the running for Sadist-in-Chief if he did not thereby extract all sorts of information helpful to the rest of us. Foremost is: “Don’t Do It.”

Dr. Mischel and his team watched through a two-way mirror to see how children coped when researchers put one marshmallow in front of them, and then told them that if they did not eat that one marshmallow, they could get two in fifteen minutes. The behavior of the children showed ways in which some children occupied their minds in order to delay gratification, whereas other children lacking such strategies scarfed up the marshmallows and lost the lottery of life. Children who were able to delay marshmallow consumption at age four were also able to excel in school, marriage, careers, and, obviously, waistlines later in life.

Before those of you with compulsive preschoolers cash in their college funds in despair, the good news is the new research on the plasticity of the human brain. Now that we know that your DNA does not determine every detail of your life, and that new neural pathways can be created even in old age, Mischel is able to present readers with strategies for building good habits of self-control. Since Dr. Mishchel was able to quit smoking, he has first-hand experience in battling a stubborn amygdala and putting the prefrontal cortex in charge. If you want to know what in the world that last sentence meant, be sure to check out the book.