Save Me the Plums, by Ruth Reichl 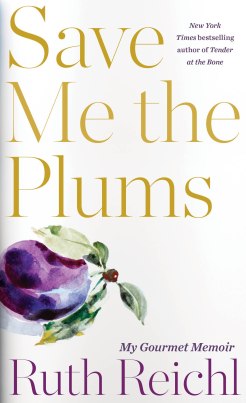 When Ruth was a little girl, she accompanied her father to a used bookstore where she came across some tattered copies of Gourmet magazine. Immediately, she wanted to learn to cook, and since her parents treated her as a pint-sized adult, she was put in charge of meals. A lifetime of foodie adventures was launched.

In her earlier works, Reichl chronicled her rise through the kingdoms of food writing, from restaurant critic to celebrated memoirs, and in this latest volume, she regales us with the history of her years as editor-in-chief at Gourmet. Rather than dry journal entries, each chapter reads like juicy gossip from a lunch with the girls. Ms. Reichl sprinkles recipes occasionally and drops names like a flower girl throws petals. She knew everyone, so whether your taste runs to famous chefs or literary stars, you will be fascinated.

We all know the sad fate of Gourmet: like so many magazines, it went under during the recession years. In the beginning of her tenure, though, there were palatial offices, generous clothing and limo allowances, test kitchens filled with competing chefs, trips to far-flung locations to revel in the local cuisine, decadent parties in penthouses, and famous authors queued up for an opportunity to get their articles into the next issue. When Reichl took the helm, she hired a couple of great talents who could channel the rivers of creativity that were already flowing among the staff and added her own vast knowledge of the food world and its burgeoning trends. She knew how to put gifted people into just the right spots. The quality of the magazine bloomed, and sales flew upward.

When the first whiff of economic troubles came along, Condé Nast hired lots of bean counters. Creativity was out, the bottom line was everything, and the publisher ignored Reichl’s repeated requests for a web presence. By the time Gourmet had a unique website, they had lost the rights to their own recipes. Corners were cut on photography and kitchen staff, and the quality of the magazine began to erode. Despite issues touting frugality, such as “Paris on a shoestring,” and a booktour announcing their latest cookbook, it was too late.

Throughout the book, Reichl deals with life issues that touch every woman: work-life balance, guilt in child-raising, and her own changing self-concept. Her story is filled with many powerful men and women who played a role in teaching her that gifted people are all gifted differently and that wielding power may not look the same from one person to the next. For some, money and position do not change them, they only allow them to fulfill dreams that lift up those around them. For others, though, power freezes their souls and destroys those within their reach. When the crash comes, Ms. Reichl reflects on whether her time at Gourmet may have altered the course of her life so completely as to make it impossible to be that free-spirited Berkeley girl again.

This delicious memoir is perfect anyone who loves a fast-paced Cinderella story, tales about the Big Apple, fascinating personalities, a soupçon of haute couture, and, most of all, the foodie universe. All of Reichl’s books are captivating. I have also read Garlic and Sapphires, which relates her early adventures as a restaurant critic, when she began dressing in wild disguises to avoid being recognized when she walked into her latest venue. Save Me the Plums is great fun with a side of introspection that gives her unique experiences universal significance.

Tagged as Gourmet magazine, Ruth Reichl, Save Me the Plums