I have been, as Dan Koch** would say, on a complicated faith journey, and whenever something significant (or truly miniscule) is happening in my life, I have to read all about it. This list contains titles that have been among the most impactful for me, although there were plenty of them that I read before this blog began, and others that I read when I was in a place of fear and kept to myself (see Pete Enns, below). There are also faith-based titles in the “Anti-Racist Reads” section, already posted. Bear in mind that I read many of these when I was deeply searching, somewhat depressed, or furious.

Disclaimer: I own all of these books, which is not typical for this librarian, so you can see where I’m putting my book money. Opinions expressed are solely my own and may not express those of my employer or anyone else.

* Shakespeare, Much Ado About Nothing. Benedict is speaking of Beatrice, whom he despises, and with whom, therefore, he falls madly in love.

**Dan Koch is the host of the You Have Permission podcast and is pursuing a Ph.D. in psychology, focusing on spiritual abuse. One of my favorite podcasts.

The Benedict Option, by Rod Dreher 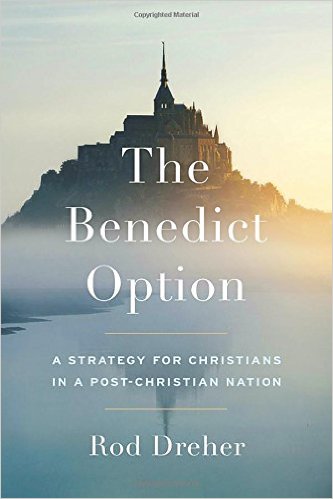 The title of this book has been so confusing for so many that I’ll start with what the book is not. It is not about Benedict Arnold. It is about Saint Benedict, the monk who founded the Benedictine order in the sixth century. It is not a political book. There is a chapter about politics, and recent political events may have motivated Mr. Dreher to write the book, but it is not about how conservatives can win elections. Finally, it is not advocating that Christians leave public life altogether, drawing into communities behind walls, reading the Bible and singing Gregorian chants.

Benedict was a man living shortly after the fall of Rome who took a good look around and realized that there were barbarians all over the place, and if the church was going to survive, she would have to take some drastic protective measures. He drew a group of men together and started a community founded on work and prayer, keeping all of their lives centered around God. Eventually, he wrote up a summary of what they needed to do and why, calling the document the Benedictine Rule. Following the rule ordered all of their days and marked out appropriate times of work and prayer, living in asceticism, chastity, and silence. The monks sometimes received visitors, often those in need of healing, whether physical or spiritual, but the visitors had to live under the rule while they sojourned with the monks. As we learned in Thomas Cahill’s How the Irish Saved Civilization, we all owe a debt of gratitude to the monasteries for rescuing many manuscripts of antiquity from destruction, and when the Dark Ages were over, the church emerged strong and resilient because of the disciplined labors of the religious orders that were, by that time, scattered across Europe.

Dreher considers that the Christian church in the west is facing another perilous time, a modern Dark Age. The Christian faith is effectively dead in Western Europe, and religious freedom is rapidly being eroded in the United States. As a matter of fact, if there is one political issue for which we must fight tirelessly, it is religious freedom. Most of this volume, though, is taken up with the ways that twenty-first century Christians—who may be women, men, married, single, parents, working for secular employers, and addicted to their smartphones—might adopt the best points of the Benedictine Rule in their own lives. He offers advice and examples of people who have founded Christian communities ranging from loose groups of church members in a neighborhood to actual modern-day monasteries. Among many, wide-ranging topics, there is a chapter devoted to education, another on sexual beliefs and practices, one on the liturgy of the church, and the last one encouraging us to fast from our technology.

About a decade ago, I read Rod Dreher’s earlier, generously-subtitled book, Crunchy Cons: How Birkenstocked Burkeans, Gun-Loving Organic Gardeners, Evangelical Free-Range Farmers, Hip Homeschooling Mamas, Right-Wing Nature Lovers, and Their Diverse Tribe of Countercultural Conservatives Plan to Save America (or at Least the Republican Party). Not that I cared to save the Republican Party, but otherwise I thought the title was a hoot, and it was good to know that someone out there had identified the tribe among which I lived. This current work is more serious, but it is also calling upon those who are willing to pull away from mainstream America to strengthen a church that is confused, fragmented, and in danger of disappearing into the dominant secular society. I cannot say that I agree with everything Dreher proposes in this book, but many of his ideas are so fascinating, and the necessity of some kind of drastic plan is so obvious, that I’ve gathered a group of readers together to discuss each aspect of The Benedict Option over a series of weeks. We will start in two weeks, and I may write a column or two on TheReaderWrites to give you a taste of our conversations. It wouldn’t be a bad idea for many readers across the country to start some discussion groups on this and similar titles. Let’s find ways to get our ideas together.

Disclaimer: I own a copy of this book. Opinions expressed are solely my own and do not reflect those of my employer, church, or anyone else. The beautiful abbey on the cover is not Benedict’s abbey in Norcia, Italy, but is actually Mont Saint Michel in France, which used to be a Benedictine monastery. The abbey in Norcia was completely destroyed by earthquakes just a few months ago. All of the monks survived.