The Goldfinch, by Donna Tartt 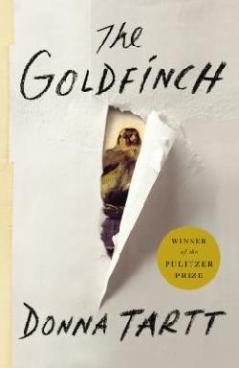 Even though Theo’s father was an alcoholic who had left them, his mother made up for everything. His beautiful, sweet, charming mother was all thirteen-year-old Theo needed to keep his world spinning smoothly. When they stopped in at the Metropolitan Museum of Art one day just to take a quick look at his mom’s favorite paintings, Theo’s world came to an end when his mother was killed in a tragic bombing. Although Theo lived, he was knocked unconscious for a time, and when he woke up, he recognized the older man whom he had assumed was the grandfather of a very cute red-haired girl that Theo had been following. The man spoke his dying words to Theo and gave him two items that Theo was able to take out of the museum with him: a family ring and a painting—the painting called The Goldfinch, by Carel Fabritius, that the man was stealing from the Met.

Not knowing that she was dead, Theo stumbled home and waited for his mother to arrive. Eventually, Social Services found him and thus began his tumultuous teen years involving wealthy friends, his derelict father, his father’s strange new girlfriend, a crazy Russian, and Hobie, the business partner of the man who died and guardian of the little red-haired girl. Theo surrendered the ring to Hobie, but never told him about the painting, which became both his talisman and his albatross. He loved the little bird but knew he should not have it, and when he watched the news reports of other stolen paintings being recovered, he could not figure out how to return it without going to jail. The twists of his life as a result of his mother’s death and the choices Theo makes in order to guard this painting lead him into situations and relationships that never would have existed if his mother had survived.

Since I will be going to New York soon and I love the Met, a friend of mine lent me her advance reader copy of The Goldfinch in preparation. I did not know that there would be a lengthy description of the bombing right in the beginning, of course, and now I’m afraid to go—but I will, anyway. The first 400 pages of this book read just like a YA novel, so that was familiar territory. Theo and Hobie are both wonderful, sympathetic characters, but Theo’s friend, Boris, is just as easy to hate as to love. He is certainly entertaining to read about, and whenever he appears on the page, the reader gets ready for chaos, but I don’t think I would like him in real life. He is great fun on paper, though.

While I was in the middle of The Goldfinch, the Pulitzer committee found out I was reading it and therefore gave it the Pulitzer Prize. At least, that’s how I see it. Donna Tartt is a gifted writer, and the ending was not as… well, I can’t tell you, can I? It ended properly, and that’s all I will say. I was a bit put off by the last ten or so pages, which seemed to be Tartt writing, “In case you didn’t understand what I was trying to say, let me spell it out.” Overall, though, The Goldfinch was a literary and engrossing story about fate, luck, significance, and art.

Disclaimer: I read an advance reader copy of this book. Opinions expressed are entirely my own and do not reflect those of my employer or anyone else.