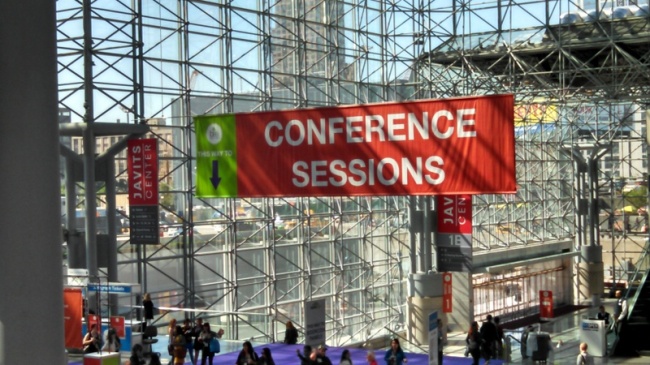 My very first conference at Book Expo America this year was called “Trends in Christian Children’s Publishing.” I was glad to find this on the itinerary, since inspirational children’s titles have been a growing hole in our collection. Many of the older titles are phasing out, and the reviewers don’t provide a lot of information on new offerings. Perhaps they just don’t know much about this niche market, and I have to admit that I am not always a big fan of what’s coming out of most of the Christian publishing houses these days. Of course, most Christian publishing companies are now part of huge secular corporations. Zondervan, for example, is a subsidiary of HarperCollins. This workshop gave me a lot of great information that will help me to make some solid new selections for the library system.

As a Christian, it really bothers me that an inspirational sticker on the spine almost guarantees that there will not be a literary award sticker on the front. We are not talking about the Bible or C.S. Lewis here– and there are notable exceptions– but most books written expressly for the Christian market are formulaic and mediocre. This is true for both fiction and nonfiction. In adult books, fiction is full of prairie romances and treacly chick-lit. The nonfiction marketing game is to get a megahit self-help book that instructs the reader to repeat this prayer, turn around three times, and click his heels together so that God will give him everything his heart desires. Once the publishers find the hit title, they repackage it for each little demographic: a pink one called Heel-Clicking for a Mom’s Heart, a boldly-colored one called Cool Heel-Clicking for Teens, and a primary-colored 365 Family Devotions for Heel Clickers. Ah, capitalism.

Not that there are no great Christians writers out there. There are, but many of them are not writing under Christian publishing contracts, and I imagine that it’s for the same reason that many Christian musicians would rather release their music with a secular music label: they just don’t want to fit their creativity into someone else’s box. Marilynne Robinson and Annie Dillard are winning Pulitzer Prizes with MacMillan and HarperCollins, and Nathan Wilson (Douglas Wilson’s gifted son) and Mitali Perkins are writing excellent children’s books with Random House. Christian authors do sometimes write for specifically Christian publishers, of course, but I hesitate to name names, since it is inevitable that I will miss someone wonderful. Eric Metaxas wrote his masterpiece, Bonhoeffer, with Thomas Nelson, and Andrew Klavan writes teen thrillers with them, as well. Ted Dekker writes truly terrifying tales for Worthy Publishing, another Christian outfit, and many others are noted below. I am eager to discover new writers who will raise the level of the craft for all of us.

In any case, on a Thursday morning, I walked a few blocks up 35th Street to the Javits Center for the very first official day of Book Expo America. The Javits is this enormous glass building that takes up six city blocks and is surrounded by construction zones. Just before 11:00, I walked what seemed like several miles down the stairs and into the conference section of the building for a workshop called “Trends in Christian Children’s Publishing.” The four panelists were representatives of Zondervan, Thomas Nelson’s children’s division (called Tommy Nelson), and Big Ideas. You remember Big Ideas: they produce the adorable VeggieTales stories.

The Zondervan representative spoke first, and she was very instructive on Zondervan’s many imprints for children. Their new teen line, Blink, is intended to be a “clean reads” selection of titles. Clean Reads are not supposed to be as evangelistic as traditional inspirational titles, but a Christian parent can feel good about handing one to his or her child. There may be religious characters in the story, but converting the reader is not the goal of the book. In the past, the emotional conversion scene was de rigueur, and often felt somewhat forced. Sometimes teen inspirational titles had such gritty characters and plot lines that the delicately reared Christian child could learn about shocking issues that they had never known existed, even though the library had placed an inspirational sticker on the spine. The point of the book was to lead teens from all sorts of situations to Christ, but the sticker would keep the goth/drug-addicted/gang member reader from ever picking up the book. Once the Christian parent figured out the content of the series, their children would never read them, either. Talk about narrowing your audience!

With Clean Reads, though, the parents know that there will be no sex or profanity in the book, so it is safe for their kids. If your kids are already believers, that may be all you need. I have purchased several Blink titles already, just because of the good reviews. They have themes and plots that will be enjoyed by today’s teens. Check out Lisa Tawn Bergren’s “Remnants” series, for example. As a matter of fact, check out everything by Bergren; she’s a terrific author. I love her “River of Time” series, published by David C. Cook. We have her titles in ebook, as well.

On a younger level, Zondervan has the Faithgirlz imprint. This line is more obviously Christian than Blink, with cute, girly covers intended for upper elementary and tweens, whatever that is. (I have a niece who thought she was a tween when she turned nine.) For boys, they have the new series “Game Face,” with the first title, Snap Decision. The cover shows a guy-friendly football huddle. Teen and younger girls will also enjoy the series “Soul Surfer,” based on the life of Bethany Hamilton, the surfer who lost her arm to a shark several years ago. We just received Hamilton’s nonfiction title, Body & Soul: A Girl’s Guide to a Fit, Fun, and Fabulous Life. Very nice. There are many more series and authors by Zondervan, including Sally Lloyd-Jones’ exceptional Jesus Storybook Bible, so I am a dedicated customer.

Thomas Nelson publishes the very popular books by Wayne Thomas Batson. If you’re not familiar with them, these are fantasy or swashbuckling tales, probably targeted for boys twelve and up, but since girls are broader readers, they may like them, as well. The covers are fantastic. Frank Peretti, Jerel Law, and Jason Lethcoe are other popular Thomas Nelson authors for the same age range.

Tommy Nelson has the corner on the Heaven Is for Real children’s adaptations, and they are the publishers for Max Lucado’s beautiful picture books. 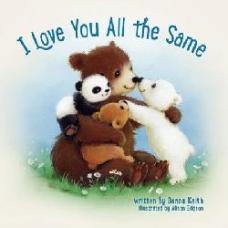 Just last week, the library received the big board book, I Love You All the Same, by Donna Keith. This lovely title features a family of bears—all different kinds of bears. It is the sweetest story of interracial adoption that I’ve seen for the very littlest children. I know so many Christian families who have adopted children from many ethnicities, and this book is perfect for them and for all of their friends. Kudos to Thomas Nelson.

Big Ideas, or VeggieTales, is producing video content more than anything else, but there are books that are based on the video stories. True, you don’t get the fun songs and silly voices, but if your kids already love the characters, why not get them reading with Larry the Cucumber and Bob the Tomato?

I was delighted to find that VeggieTales is making a comeback! Mike Nawrocki, the man who is the voice of Larry the Cucumber, was on the panel and gave us an unexpected and convincing demonstration of Larry’s voice. They plan to bring out beginning readers for the “I Can Read” imprint, as well as books of prayers and My Great Big Veggie Storybook. I hope to be able to purchase these soon for a new generation of Veggie lovers.

After the workshop, I wandered around the exhibitor space— thousands of square feet on the third floor—and found Shadow Mountain Publishing. It turns out that I have been buying their books by Brandon Mull and Obert Skye for years without realizing that Shadow Mountain is a Mormon-based publishing house that prints “clean reads” and what they call “value-based” books for all ages.

I can say that their staff at BEA were the nicest and most helpful of all of the publisher reps. that I encountered, followed closely by DK—but only after the DK reps. found out how much money I have to spend. Shadow Mountain also publishes the popular new “Janitors” series and the phenomenal James Dashner’s “13th Reality” series. They have a few cookbooks, most notably The Romney Family Table. Not a Christian publishing presence, but a safe choice for children’s fiction.

To cover all faith-based publishing, I would have to include the wonderful Jewish voices out there, as well as emerging Muslim children’s writers, but that is for another day. This workshop and the resulting research have helped to guide me to great new titles for the library, and I hope this article will help parents to some new reading experiences for their families. It is encouraging to know that there are still Gideons out there, beating out the wheat in the winepress.* Let’s find them.

Disclaimer: Opinions expressed in this article, while brilliant, are solely my own and do not reflect those of my employer, my church, or anyone else.